They are the “dream team” scientist couple who came up with a big idea that could protect humanity from a virus that has killed more than a million people and put an end to a pandemic that has upended economies across the globe.

But as the world breathed a sigh of relief at Monday’s news that the experimental vaccine developed by German biotech company BioNTech and US pharmaceutical company Pfizer has shown positive results in the all-important phase 3 trials, Uğur Şahin and Özlem Türeci displayed characteristic modesty. 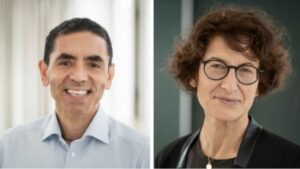 BioNTech chief executive, Şahin, known for still cycling on bike to the headquarters of a company currently valued at $21.9bn (£16.6bn), said the trial results were above all a “victory for innovation, science and of a global collaborative effort”, which might hopefully help the world “regain a sense of normalcy”.

The comments hinted at the scientific rigour, unrelenting work ethic and appetite for entrepreneurship that has seen Sahin and Türeci’s company outpace more well-established competitors in the race for a Covid-19 vaccine – and made the couple the first Germans with Turkish roots to enter their country’s rich list this autumn, at number 93. 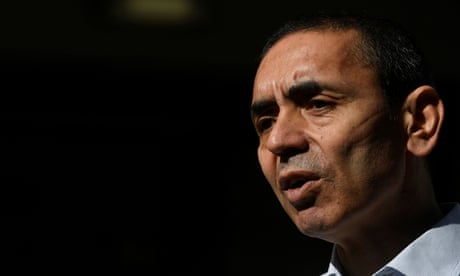 BioNTech’s Covid vaccine: a shot in the arm for Germany’s Turkish community

Both scientists are the children of Turkish migrants who moved to Germanyin the late 1960s. Şahin, 55, was born in İskenderun on the Mediterranean coast but moved to Germany as a four-year-old, where his father worked at the Ford factory in Cologne.

Fifty-three-year-old Türeci, BioNTech’s chief medical officer, grew up in Lastrup, Lower Saxony, where her Istanbul-born father worked as a surgeon at a small Catholic hospital.

For both, cross-pollinating cultures proved dynamic childhood environments: Türeci has described herself as a “Prussian Turk” and spoken in interviews of her admiration for the nuns who looked after patients at her father’s hospital, while football-fan Şahin found inspiration in popular science books he took out from the library at his local church.

After gaining his doctor with a thesis on immunotherapy treatment for cancer cells, Şahin followed his PhD supervisor to Saarland University in the town of Homburg, where Türeci was studying medicine.

The couple married in 2002, interrupting their research only briefly to slip out of their lab coats and dash to the registry office on their wedding day. Their daughter was born four years later.

Since 2001, Şahin and Türeci have been based in Mainz, a city on the river Rhine famous for its carnival culture and as the home of Johannes Gutenberg, the inventor of the movable-type printing press.

The two scientists showed a similar enterprising zeal. At Mainz university hospital, the couple planned to set up a research lab to investigate how immune systems could be trained to attack cancerous cells. When research funds were hard to come by “we simply started our own company”, Şahin told news portal Heise.

“Their first company, founded in 2001, was called Ganymed – not after the handsome hero of Greek myth but a Turkish expression roughly meaning “earned through hard work”, as Türeci told Süddeutsche Zeitung. The company, which pioneered precision antibody therapies against cancer, was sold to Japanese pharma company Astellas for €1.4bn in 2016.

They founded their second company BioNTech in 2008 with the Austrian oncologist Christoph Huber, who still sits on the supervisory board. With BioNTech, which has currently some 1,300 employees, the couple first set to develop immunotherapy cancer treatments, using genetic material called mRNA to train the human body to produce its own antigene.

Years of experience with the mRNA method came in handy when news of the novel coronavirus reached the scientist couple at the start of the year.

Şahin says he first read about Covid-19 in the Lancet on Friday 24 January 2020: the following Monday he summoned his employees that the company would pivot to finding a coronavirus vaccine. Some of his colleagues were displeased, already focused on their skiing holidays, he told the Wall Street Journal. But Şahin persisted.

US pharmaceutical company Pfizer, which has previously collaborated with BioNTech on a flu vaccine, was quickly convinced to help with development and distribution costs. By March, when Germany entered its first lockdown, BioNTech had already developed 20 candidates for a vaccine, of which it would go on to test five for immune reactions in a research programme accompanied by 500 scientists called Lightspeed.

The breakthrough came in early November, after an interim analysis showed their vaccine candidate to be 90% effective in protecting people from transmission of the virus in global trials, better than most experts had hoped for.

Asked whether when he would take the vaccine himself, Şahin told German news website Business Insider: “As soon as the vaccine has been permitted, I will be one of the first to do it. But first we have to make sure that the vaccine arrives with those people who need it urgently: especially the elderly, people with pre-existing conditions and medical staff.”